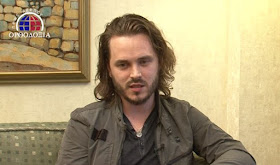 In the video interview below, five-time Emmy award winning Hollywood actor Jonathan Jackson, who frequently visits Mount Athos as a pilgrim, talks about perhaps the most challenging role of his career playing Elder Joseph the Hesychast in a documentary filmed on Mount Athos.
Jonathan Jackson sees this particular role as an "incredible blessing", in his interview with the International Orthodox Church News Agency and journalist Pepi Oikonomakis. He calls it a "unique experience" both "physical and spiritual", and he would not have done it without the blessing and prayers of the Athonite fathers.
This documentary comes on the heels of the proclamation last month by Ecumenical Patriarch Barthomolew while visiting Mount Athos of the soon to be canonization of Elder Joseph the Hesychast.